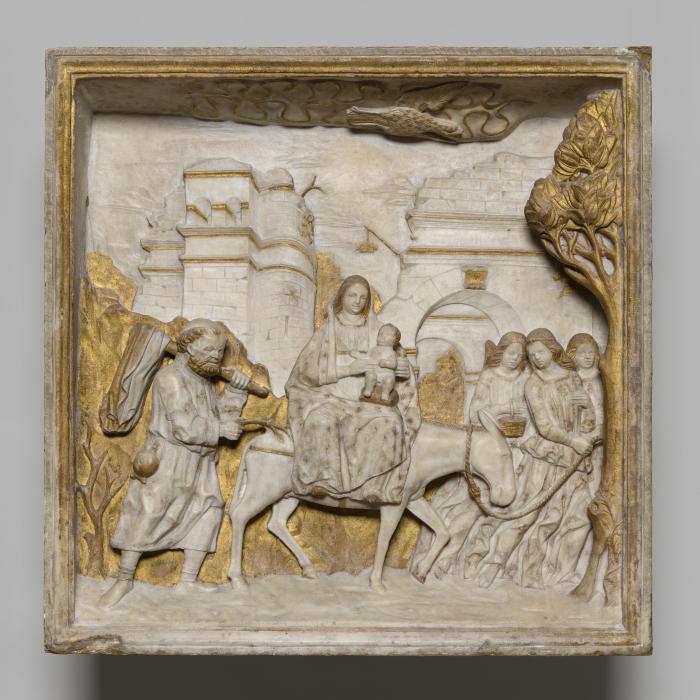 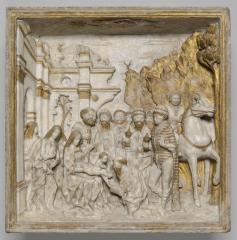 K1884
Benedetto Briosco and Tomaso Cazzaniga
The Adoration of the Magi
National Gallery of Art, Washington, District of Columbia

Benedetto Briosco and Tomaso Cazzaniga
The Flight into Egypt

K1885
2178
Briosco, Benedetto, active 1477-after 1514
Cazzaniga, Tomaso, active ca. 1477-1504
Italian
1484
marble, partially gilded
Sculpture
61 x 61 x 13.65 cm (24 x 24 x 5 3/8 in)
National Gallery of Art, Washington, District of Columbia
Amadeo, Giovanni Antonio, 1447-1522
Tomb of Pier Francesco Visconti, count of Saliceto [d. 1484], in S. Maria del Carmine, Milan. [1] Vercellino Visconti. Prince Belgioioso, Milan. Prince Trivulzio, Milan; [2] (Jacob Hirsch, New York), by at least May 1937; [3] purchased January 1952 by the Samuel H. Kress Foundation, New York; [4] gift 1952 to NGA. [1] The original location of this relief and NGA 1952.5.90 has been mistakenly given in the literature as either S. Marco in Milan or the Certosa in Pavia. They are part of a group of five reliefs with the same provenance; two others are in The Nelson-Atkins Museum of Art, Kansas City, Missouri, and one is in the Cleveland Museum of Art. Ulrich Middeldorf, Sculptures from the Samuel H. Kress Collection: European Schools, XIV-XIX Century, London, 1976: 55-57, provides a thorough discussion of their history. Information about the two reliefs owned by the NGA came originally in a bill of sale from Jacob Hirsch to the Kress Foundation for three sculptures, including NGA 1952.5.90 and NGA 1952.5.91 (copy in NGA curatorial files). It described the reliefs as coming "from the tomb of the Dukes Saliceto Visconti once in the Certosa of Pavia," and also says they had "been in the Palace of Prince Trivulzio in Milan since the early 18th Century, apparently after the tomb had been dismantled..." In a letter of 10 January 1955 to Perry Cott (in NGA curatorial files), Hirsch writes that this information had been given verbally by the "Major Domo of the Prince Trivulzio," who said the monument had "been demolished about 1740, and the reliefs transferred at that time to the Palazzo Trivulzio in Milan." However, a letter of 22 July 1955 from Professor Gian Luigi Barni to David Finley referred to the reliefs as "della Tomba Visconti di Saliceto gia nella chiesa del Carmine di Milano," placing them in their correct original location. [2] The Visconti, Belgioioso, and Trivulzio names are per Middeldorf 1976, 55. He writes (56 n. 9) that D. Sant'Ambrogio, Archivio Storico Lombardo, XVIII, 1891: 403, "gives a plausible account of the descent of the reliefs through these families by inheritance, without giving genealogical details." [3] Hirsch lent the relief to an exhibition at the The Fogg Art Museum in 1937. [4] The bill of sale (see note 1) is dated 30 January 1952.
1952.5.91
1885
A-1615
JPG Image
PDF Summary
Compare Image
Record Link
Jacob Hirsch, January 30, 1952
Gift to National Gallery of Art, October 15, 1952
Related Collection Record
Related National Gallery of Art Library Image Collections Record